The time is slipping away to the 15th of June and the start of this years RASA. Every time I think I have enough time to get sorted and the boxes packed another day has gone bye and I have not got anything done. Training is a bit less than what it should be. Tim rode the Falls to Fountains race at the weekend and won his class, he also came second in his class at Karkoof. The man is on a mission !!!! Speaking to him yesterday he was a bit flat so he must have raced hard the weekend. Im sure there is an over 60 vitamin that he can take ? besides Whiskey and cigars !

We are all riding the 94.7 cycle race in November as part of the charity ride Peddling for Pompes. This illness effects so few people that little is known about it and Kelly, Annettes daughter in law has become a strong advocate for the disease as her son is a sufferer, only 2 children are diagnosed in South Africa. As this charity drive is very close to us in that Annetttes Grandson suffers we have decided that we would like our charity drive this year to be able to raise funds so that correct diagnoses of the disease is made possible here in South Africa. I will be posting more about this latter in the week as we are awaiting the pay portal to be approved. But be warned the begging bowl will be coming out and its such a great cause we hope that you will be generous in your support.

By entering the 94.7 challenge I won a bike, when they phoned me from the radio station I thought it was another Nigerian 911 scam and Alex J had to tell me that its real, Yay I never win anything so it was a great surprise. 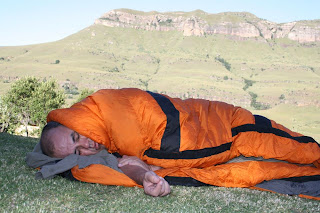 The training methods of for the Freedom Challenge are very different to a normal race and as can be seen by the photo above I have been practicing very hard at one particular aspect. So now its time to practice the other important part and thats cycling. Stay safe everyone and train hard, min dag to go !!!!
Posted by Two Old Farts at 15:24