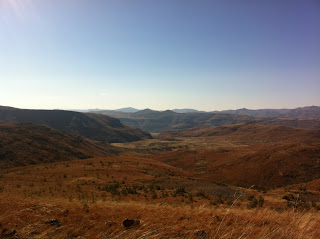 We left Slaapkranz by 06h00 and as we left we were told that as there was no frost we would have wind, oh how right they were. The wind was howling at us all day. We made the 1st portage in good time and made it all the way up and down with no navigational problems, it helped that the downhill section was marked with flags for a 4x4 course. Again it was wet and muddy.

As we approached the 2nd portage the wind picked up, the tricky thing of this portage is to select the right mountain to go up, the one on the left seems the right choice and it will take you all the way back to Rhodes, you need to take the one on the right. So listening to Status Quo on the ipod off we went, by the time we got to the top we could hardly stand with the bikes, we took a quick photo and ducked down the mountain. Just by the Bontahoek farm we saw the evidence of what the Jackals are doing to the sheep. The sheep was only half eaten and left. One can have sympathy with the farmers and their continual battle with the over population of Jackals, but you have to ask the question, how did the Jackal population get so out of control in the first place ? and how can the balance be restored ?

Once at Bontahoek farm we tried to speed up but the head wind was really strong and we had a hard ride to Moordenaarsport and arrive just after 18h00 and decided to stay the night as we were flagging a bit and the ipod tune of the day was not helping turn the legs over. We heard that Alex harris was also on his way and he arrived at 21h00. What a nice guy and great athlete, Alex is riding for CHOC and please support him if you can, its a really deserving charity that helps children, and Alex as a representative of Choc is a great choice. Alex left the next morning at 03h00 and we left at 03h40, it takes us longer than him to get going in the mornings. 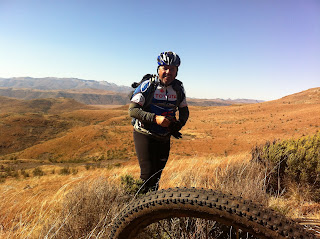 We rode in the dark and cold to Vaalbank and arrived at 07h30 as Alex was leaving, we had been anticipating Sandra's breakfast and we were not dissapointed, she really puts pon a spread and is the nicest person, she can never do enough for you, and her husband is exactly the same, great people.
Posted by Two Old Farts at 15:01