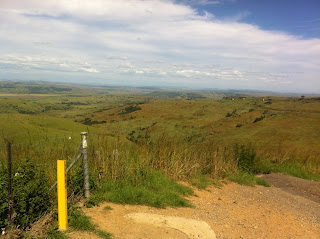 Its been a couple of weeks of race's for the Old farts, Tim, Mike and I went to Sabie and rode one of the toughest races on the MTB calendar, the 75km Marathon it was a B***H of a race, every year the race organizer tries to make it harder, when will they get the point, its Sabie its hard enough. We had a 30km up hill and then 20 Km from the end they have a technical uphill single track that went on for ever. I have never seen so many riders lying on the side of the track, a mixture of the course and the heat. The old farts, did ok, Tim did a 6:40, Mike a 5:30 and I did a 7:03, Mike and Tim rode the 45km the next day, I made the tea.

This weekend saw us head off as a three man team in the Traans Draak 210km 24 hour race starting just outside Harrismith in the Free state, We arrived and sorted out the registration, we were a bit disappointed that the field had only grown by 10%, the race deserves a better entry number. Mike and I had completed the inaugural event last October in 17:26, this year as a three man team we were hoping for slightly better time wise.

We started off into a head wind and we were able to draught behind another team, we maybe older but not stupid !!!! we managed the first 30 km in 1:40 which for us was movin ! We managed to get to the halfway mark in 8 hours odd, then the hills started, we peddled into the dark before we hit the BIG PASS which is a 7km walk up the worst so called road I have ever seen, I lost my sense of humor near the top, but Tim and Mike made me laugh and we managed to finish in 15:26, can you believe 2 hours exactly better than last year, we were well chuffed. It also meant that we had a reasonable nights sleep. We must say thanks to our seconds Annette, Steve and Josh who looked after us, fed us, and laughed at our antics all through the night. With out the seconds the race is not as much fun. Thanks.

The maps for the Freedom Challenge are out and we need to see the couple of changes that have been made, the gear selection needs to be refined and the training needs to continue, the next couple of months should be interesting !!!
Posted by Two Old Farts at 19:09