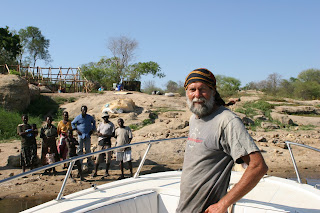 As you can see from this picture of Tim he has been on the road a long time !! not really, the photo was taken of Tim after he was attacked by the big Croc paddling down the Zambezi.

Tim has left Cambria and is on his way to Willomore, he has spent yesterday coming down the trail to Cambria having crossed what should have been a small river 11 odd times. Tim ended up swimming and at 18h00 was lost standing at a game fence, wet cold and frustrated all he wanted to know was which way to go.
After he climbed a hill and phoned me we managed to point him in the right direction. However it was dark and Tim had just swam through a river naked so his cloths did not get wet again and he was not thinking straight. You need to remember he has left the support stations at 03h00 most mornings and has often only got to the next support station after 23h00. So off Tim went found his way and then got lost in an orange orchard. Eventually Tim arrived at a house where a large lady opened the door, Tim asked where he was, and got told he was at the support station, apparently Tim nearly kissed her. He had made it about 20h00 last night. Not such a long day after all !!!!!

Tim has been on the road 17 days today and he has put in an average of 16 to 18 hours a day, he has 26 days to get to Cape Town, and knowing Tim he hopes to still do it in under 21 days, lets hope he does. Although he can not read these bloggs, especially as he has lost his glasses, I know he will afterwards and have a laugh. By the way if you send Tim a message please use capital letters so that he can read them.
Posted by Two Old Farts at 17:24