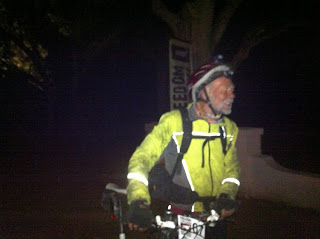 Tim arrived at Dimmersfontien at 18h45 on the 6th of July 2011, he rode, walked, pushed and carried his bike for 24 days, 12 hours and 45 minutes. his arrival was masked in tension, Tim had got lost coming down the mountain he had also lost his brakes so he was pushing his bike downhill !! Tim's arrival time kept being pushed out, much to the frustration of Annette who had been prowling the car park at the wine farm since 06h00.

Tim was greeted by family, friends and the race office at the Manor House at Dimmersfontien, the relief was clear on Tim's face as he stepped of his bike, his first comment was "THAT WAS QUITE TOUGH" "REALLY HARD WORK" the master of understatement !!! 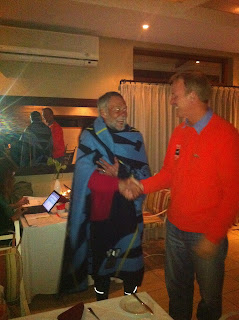 Tim was presented with his blanket by David and as you can see by Tim's face he appears happy with it !!! The RASA is without doubt one of the hardest if not the hardest mountain bike race in the world not just because of the terrain, but the weather, navigation, carrying your gear and the immense amount of head time you have to give the race. Tim overcame the race through pure grit, determination and love of life.  Tim's the man !!!!!!
Posted by Two Old Farts at 06:54