Tim arrived at Diemersfontien at 16h18 on Saturday the 7th of July 2012. The weather had been terrible for most of the day with the Cape bucketing the rain down as he climbed up Steynskloof. Tim said that the climb up was slippery and hard this year, but once he got over the top he managed to make up some time as the weather cleared and he could ride again.

Tim is one of only a few people to have finished the race back to back in consecutive years and his achievement was noted by David the race director of the Freedom Challenge, Tim's almost solo effort was an incredible effort. Tim had a glass of red wine and a very good cigar, and then ate his pizza before retiring off to bed. Tim will spend the rest of the week in the Cape and will attend the finishers evening next weekend before heading back to the bush. Tim your the man !!!! 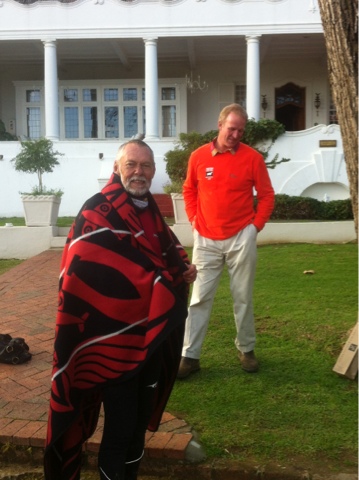